This post is a response to a previous review. Click here to read my original Britney Slumber Party review.

Ok, it’s been a while (Britney croak: I shouldn’t have kept you waiting). No really, it’s been an actual year since the last post. Let me begin by apologising to all dedicated readers who no doubt have spent the past 12 months on a knife edge, waiting to discover whether my predictions for Britney’s Slumber Party were anywhere near the mark. Of course, a quick Google search could have answered the question but such a move would involve putting one’s faith in the shameless liberal internet giants and their Britney-skewed agenda. No, dear reader. Place your faith in me, a small-time blog writer whose only bias is a desperate pig-squeal of “Please like me!” belying each sentence. And as all my fascist-dictator friends tell me,  an information source who exhibits a grovelling need to please is the most reliable way of getting to the particular version of the truth that you would like to hear.

So without further ado, let us examine the unquestionable facts. My prediction for the song in the UK Charts was the unadulterated, copied and pasted: It’ll probably make the Top 100 for two or three weeks – let’s say peaking around number 50 – but that’ll be it. I recall worrying at the time that I was being too harsh, that the Britney Brigade would tear at their collective (acrylic) wig and shriek me down for being a hateful skank. (Incidentally, I did bear some bitter twink’s wrath on Twitter. Poor lad. He’s 17 so probably thinks Britney is some hot new star on the rise and that he’s discovered her early. Fingers crossed for Yung Brit’s gritty new mixtape!). In the end, Slumber Party entered the Official UK Chart at 73 and then seemed to disappear into oblivion. A Britney-calibre hit, it wasn’t; a rally from the flop of previous single Make Me, it did not provide. 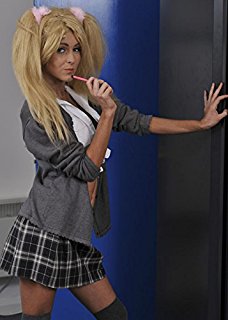 Does it fill me with an evil sense of glee to have been sort of right? Not really. Britney does seem like a nice lady whose slow commercial decline is not entirely deserved. Listening to the song again today, I’m reminded that I really do like it. It’s not that Britney has given up trying, it’s more that she’s chosen to move away from a good ol’ bop and the average commercial radio listener doesn’t seem that interested in the results.

Who knows? Perhaps Britney herself is happy to rescind her crown and occupy a more low-key position in the world of pop. Apparently Madonna has been claiming that it’s time to reinvent the pop tour as a smaller-scale event, conveniently coinciding with her own commercial slow-down. After Britney’s two underperforming singles, the Glory album never really took off. And so, thoughts turn to Britney’s next move. Will she embrace a stonking, electro, sequined body-suit return to form featuring some foolproof rapper du jour? Or will she just finish up her Vegas residency and retire to the hills of LA, content with a quiet life and a strong social media presence to promote Britney-brand fragrances and delightfully meaningless tat? (I’m not writing that in a judgemental way, I am literally the proud owner of a Britney hairdryer, procured from the LIDL bargain basket). Or indeed, will the legendary Ms. Spears just bite the fading-popstar bullet and go for a full Christmas album? If so, can Team Britney PLEASE utilise her boyfriend as a marketing tool in a more persuasive (shirtless) way than in the Slumber Party video?